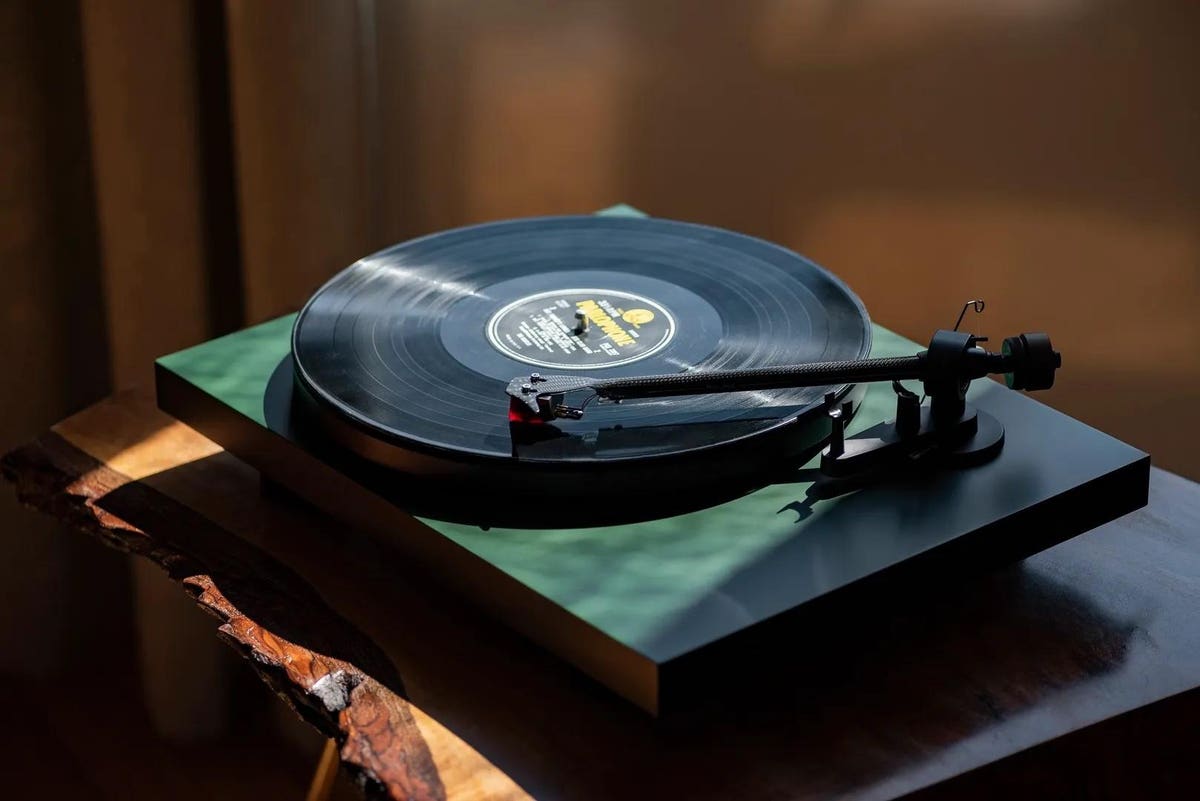 If you’re in the Generation X age group, you probably listened to music using a record player as a child, upgraded to cassettes in your early teen years and then graduated to compact discs. As an adult, you likely now stream your music from the Internet or play digital versions of your favorite songs and albums on your computer, smart speaker or mobile device.

Despite this evolution in how many of us listen to music, there are plenty of people who have returned to enjoying music distributed on vinyl albums that are played on a traditional record player (or turntable). In fact, many of the best record players available today have a lot of modern technology built into them, combining nostalgia with practicality. These updated machines still offer the timeless experience of placing a vinyl record onto a turntable to listen to an album.

They’re also increasingly affordable: You can pick up a basic unit for less than $100. Conversely, the audiophiles among us can invest thousands in a top-quality device. For most, though, a mid-priced turntable, like the Pro-Ject Carbon EVO ($599), will likely serve you well—whether you’re making an audio visit to Harry’s House, or plan to reminisce a bit about a ride in a yellow submarine with The Beatles.

Buckle up as we focus on eight of the best record player options currently on the market. Regardless of where you are in your audio journey, you’re sure to find one that nicely fits your feature requirements and budget.

A Turntable With Good Value And Great Sound

Everything You Need, Bundled In One Package

A Turntable To Appeal To Your Eyes And Ears

An Affordable Yet High-Powered Addition To Your Home

A Pick For On-The-Go Record Enthusiasts

A Turntable That’s Also A Work Of Art

What To Consider When Buying A Record Player

While you can purchase a record player for less than $50, if you want an enhanced listening experience, you’ll need to invest at least several hundred dollars to acquire a record player that generates really good sound. But if you’re a self-proclaimed audiophile looking for superior audio quality, you can easily spend thousands of dollars on a high-end turntable.

An average listener, however, should easily be able to find a record player (or turntable) that generates really good quality sound, offers a beautiful aesthetic and that includes modern-day features—all for less than $500. Although depending on which record player model you choose, speakers and other required components may be sold separately.

When evaluating a record player, you want to pay attention to its six core components—it’s stylus, phono cartridge, tonearm, pre-amplifier, turntable and amplifier. Each of these components will directly impact the audio quality you hear when playing your favorite records.

Let’s take a look at some of the key features to consider when choosing a record player.

This is not really a consideration when shopping for a low cost record player. However, once you start looking into mid-to-high-priced options, this is when the craftsmanship and quality of the materials used for each of the core components becomes essential.

Even if a record player has internal speakers, you can often connect the device to external speakers either using cables or wirelessly. This will often allow you to boost the quality of the audio. So, if you have speakers you’ll want to connect to the record player or turntable (or plan to purchase new speakers), shop for a record player that offers the right output options to accommodate this.

RPM stands for revolutions per minute. It’s a measurement of how quickly a record spins on the turntable. To accommodate all vinyl records, you want a record player that can be set to 33, 45 or 78 RPM and that accommodate the most common size albums (7, 10 and 12 inches). Keep in mind, not all record players or turntables support 78 RPM.

Basically, when you use a manual record player, you need to physically place the record onto the turntable and then lower the tone arm onto the record yourself. Then, when the album is done playing, you’ll need to manually lift up the tonearm.

Conversely, once you place an album onto the turntable and press a button or lever, an automatic record player will control the tonearm, place it onto the record and begin playing the album. Then, when the album is done playing, the tonearm will automatically lift off the album.

Available Space For The Turntable, Speakers And Other Components

In some cases, a record player includes everything needed to play albums bundled into one device. An example of this is the Victrola Revolution GO. This type of option is compact and nicely sits on any flat surface—such as a table, desk, or shelf. However, if the turntable is separate from other components, like speakers, make sure you have the physical space in a room to set up all of this required equipment. After all, you probably don’t want lots of cables crisscrossing across your floor or visibly hanging from a shelf.

If you simply want to play your old vinyl records or go out and purchase some new ones to listen to, you can get away with spending less than $200 for a good quality record player that’ll definitely serve its purpose. However, when it comes to high-end record players and turntables, there’s really no limit to how much you can spend. Dropping between $20,000 and $30,000 on just a turntable is not unheard of—that is, if you’re a very wealthy audiophile.

Here are some answers to commonly asked questions about record players and turntables.

Are Record Players Worth It?

Some people are adamant that the audio that’s generated from a record player or turntable is more authentic to what a recording artist or band intended than anything that can be heard from music in a digital format. If you have that belief, or you’re just going for the nostalgic experience of listening to vinyl albums, then a record player is definitely worth it.

Although, if you subscribe to a streaming music service, like Apple Music or Spotify, there’s definitely something to be said about using the voice assistant built into your mobile device, computer or smart speaker, and simply being able to verbally request any song you want played instantly.

What Is The Difference Between A Record Player And A Turntable?

Many people use the term record player and turntable interchangeably. Technically, a record player has a built-in amplifier and speakers, so it’s an all-in-one unit. A turntable, however, includes a platter (upon which the records are placed to spin them), as well as a tonearm/cartridge that picks up the audio that’s carved into the record. A separate pre-amp, amplifier and speakers are required and need to be connected to the turntable, often using cables.

Some modern day record players and turntables that have Bluetooth functionality built into them can wirelessly play music through Bluetooth speakers. Typically, the speakers need to be within about 33 feet from the record player.

The obvious answer is the production quality of the music that’s been recorded and pressed onto a vinyl album will determine how good that audio sounds. However, when a record player is involved in the audio playback process, sound quality is directly impacted by how accurately the stylus (needle) reads the record grooves—without adding any unwanted distortion. Any unnecessary vibration of the record player, for example, will generate unwanted hisses or noise.

Ultimately, for a record player to sound good, it needs to utilize a low vibration chassis and motor. A motor/drive that operates at a consistent speed is also necessary, as is having a low resonance tonearm that’s able to ride the grooves of the album freely.

In today’s digital world, vinyl records can be hard to find. To expand your vinyl record collection, your best bet is to visit websites, like: Discogs.com, Boomkat, Amoeba Music, Presto Music or Dusty Groove.