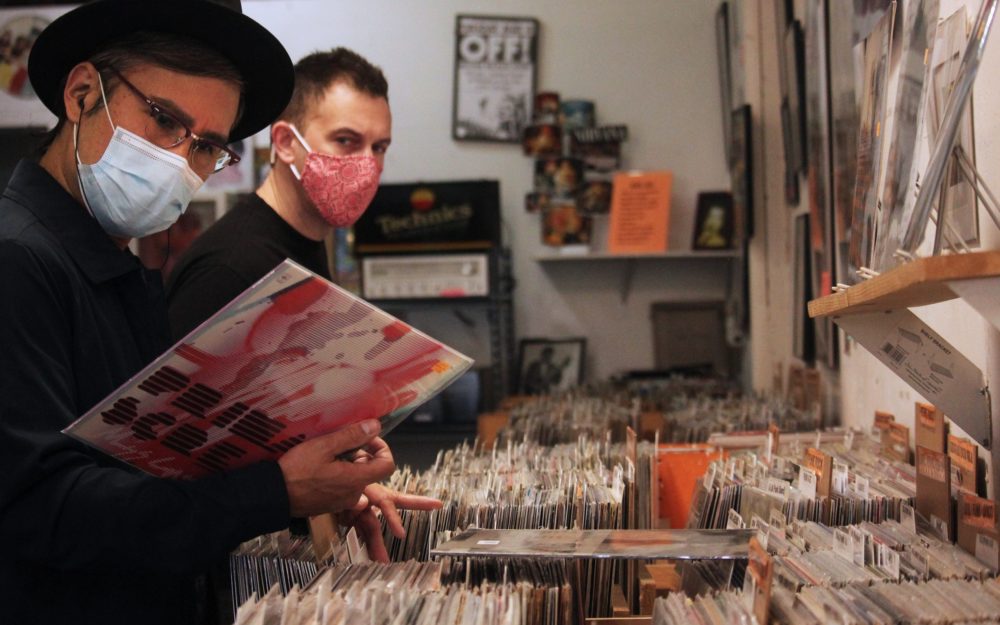 The must of hundreds, thousands of slowly decaying record jackets hangs in the air. If history has a smell, this is it. Music resonates throughout the store, washing over the bin-diving clientele. Masked and gloved, the audiophiles search row after row of vinyl, searching for something—something that catches their eye or perhaps a specific album they have sought for days, months, years.

“Records have always been experiential. Growing up, there was always a communal aspect to listening to new records—you go to your friend’s house, you sit and listen together,” said Rand Foster, owner of Fingerprints Music in Downtown Long Beach. “And we’re an experience-based business.”

When coronavirus struck, the record store experience was muted. Many shops, Fingerprints included, quickly altered their business models and created online stores to make up for the loss of in-person shopping. But it is not the same as the search, the journey, Foster said.

From January 1 through March 12, total album sales were down 6.7% over the same period last year, according to a midyear report from Nielsen Music and MRC Data. The decrease is due to a major decline in digital album sales—down nearly 25%. Physical album sales on the other hand were up 4.6%.

For the first time since 1986—34 years—vinyl record sales are outpacing CD sales in the U.S. During the first six months of 2020, vinyl records accounted for $232.1 million of music sales, whereas CDs brought in $129.9 million, according to a report by the Recording Industry Association of America.

While the vinyl record world is booming, Rand said he has had a rough couple of years and the onset of the pandemic did not help.

“Having a construction project next to the store had us down 20-25% every month for two years,” Foster said. “So we came into COVID very undercapitalized, very unprepared and without a whole lot of help. So there was a lot of times when I thought, ‘Well, this might be the end of it.’”

Fingerprints celebrated its 20th anniversary in early July by being closed for business.

Since reopening, Foster said business has been robust. He expects that, since record stores are as much about the shopping experience as they are about the product, that the pent up demand to bin dive was strong. Also, with people staying home more often, new music is a must, he added.

Third Eye Records owner Gary Farley first opened his shop about a decade ago. He said that during his years in the vinyl game, he has never seen the amount of reissued records than he has the last several years. The plus side is a continuous stream of brand new vinyl that supplements times when the stream of incoming used records slows; the downside is the amount of shelf space dedicated to reissues, meaning less space for used inventory, which have a higher profit margin for stores.

Like Fingerprints, Third Eye retooled quickly and put up an online store to move records while the store was closed to the public.

“The pandemic forced us to rethink and, fortunately, we were able to adapt fairly quickly. It’s another stream of revenue to access when we’re not open,” Farley said. “That really saved us. We were also doing local deliveries—it got me out of the house, not thinking about what was happening and having some interaction.”

Despite the pandemic, Farley said his sales this year are on track to surpass 2019, due to the addition of the online store and the fact that the business is running more efficiently than ever.

Justin “Dex” Dexter, owner of Dex Records, was a bit more nonchalant when the pandemic struck. He did not scramble to set up an online store, opting instead to let the chips fall where they may.

“We’re all in the same boat and there’s nothing we can do about it,” Dex said. “My philosophy is [stuff] happens and you just gotta roll with it.”

That is not to say Dex did not have very real concerns in the first few months of the pandemic. Fortunately, he was able to reach an understanding with his landlord that allowed him to make ends meet. Since reopening, Dex said business has been booming but with the months he was closed, he’s not sure how his 2020 sales will compare to last year.

Dex said his greatest challenge now is keeping his store stocked. He depends heavily on purchasing records, sometimes entire collections, from people at their homes or at the store, a practice that has become difficult in the era of COVID-19. All record stores receive their used inventory from the general public—estate sales, people bringing portions of or entire collections to the store—and pay bulk prices, which results in the higher profit margin for used vinyl.

Hector Waluyo is the latest addition to Long Beach’s bustling record store scene. He opened his shop, Twelves Records, almost one year ago, just months before the pandemic shut him down.

“The first year of business is always full of learning and trials and errors but this year took the cake—this is gonna be in the history books,” Waluyo said. “It’s like on steroids. I’ve learned things every day and need to adapt every week.”

About 90% of Twelve’s stock is used and the business model was centered around in-store shopping with no plans for an online presence outside of social media. During the months of forced closures, Waluyo altered his strategy by posting specific records for sale on Instagram, first come, first served, with free shipping and payments made digitally. He said the online shift allowed him to reach a customer base outside the city, even in other states.

When curbside pickup became an option for retailers, Waluyo opted to keep the store closed. Since retailers were allowed to open for in-store shopping, Waluyo shifted his business model again—the shop is open Fridays, Saturdays and Sundays by appointment only, limited to four customers at a time for one hour. For now, he said the model is working well.

“At first, everybody was very fearful because nobody knew what was going to happen. But we’re still alive and kicking, still buying records and …  able to pay the rent,” Waluyo said. “It’s really just thanks to the whole music community. It’s been awesome.”