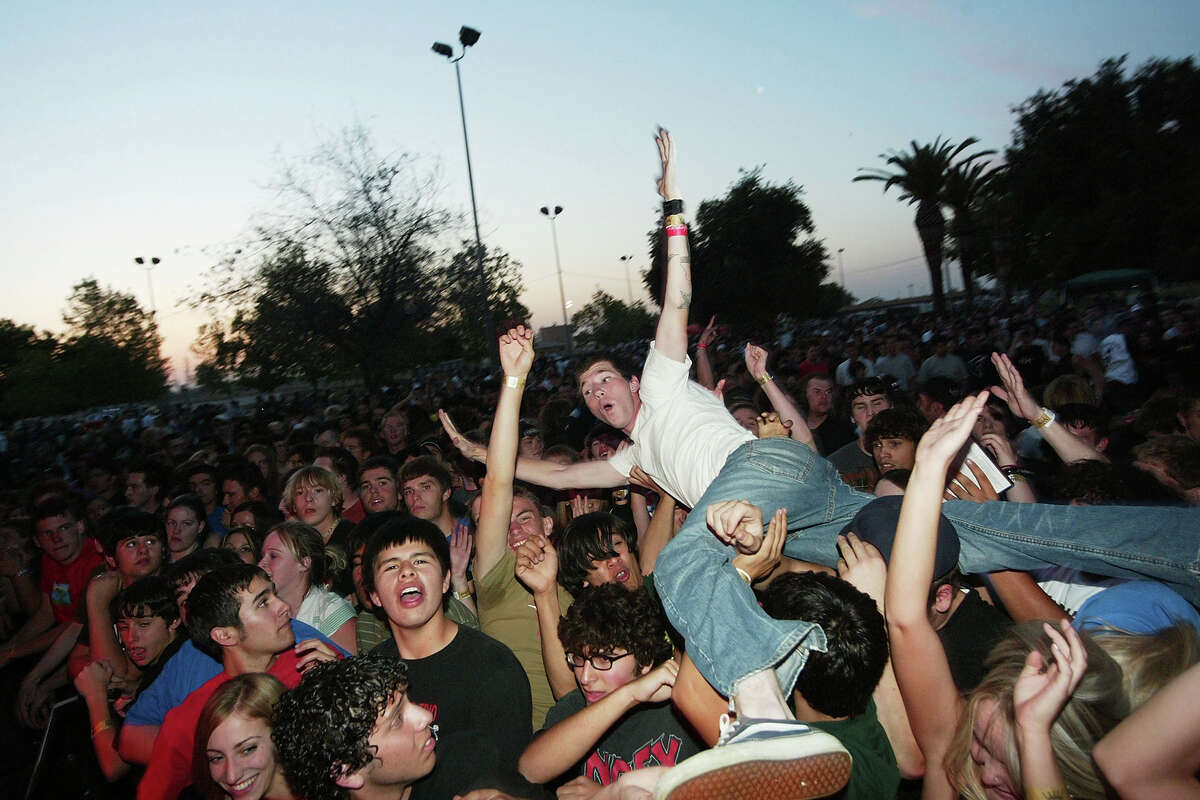 They are Black and white and Latino and Asian. They are queer, straight and straight-edge. They come from poor, rundown neighborhoods and new suburban tracts. They occupy the void and fill it with music and lament and shouts and laughter.

They ride the bus, roll up on their bikes and boards and get dropped off in sedans and SUVs. They organize, congregate and mingle. They dye their hair, get piercings and tats and wear black, or they do none of these things. They form bands, post flyers and hold concerts. They get in fights and they make up. And whether or not anybody shows up, they dust off and do it all over again.

They are Bakersfield punks.

Every scene needs an epicenter. A default champion for the community. In Bakersfield’s case, that place is Going Underground Records, a record store that somehow manages to front a decadeslong movement and, every day, pumps new blood into a dilapidated downtown as it provides a safe haven for punks and audiophiles alike. The person at the helm of it all is the shop’s owner, Ron Ramirez.

Ramirez, 42, has traversed roles as employer, album producer, concert promoter, consigliere, collector and champion of the scene over the past two decades. But he remains modest in his approach.

It would be a disservice, he says, to categorize his store as more than anything but “one small cog” that helps keep the downtown going, and perhaps provide a little “cultural light.” But for a person who claims that all he’s done for the past two decades is “sit in a store” and serve as a kind of a DIY friend to the friendless, he has built a loyal following and grown a movement well beyond the Central Valley.

On the last Friday in August, the mercury in downtown Bakersfield was a steady 90 degrees, even after the sun had set.

At dusk, a crowd began to swarm in their seemingly universal and timeless uniform of black shirt, baggy black pants and black (or, pick any other color) bangs. They started to congregate.

Inside, they were treated to a screening of “The Decline of Western Civilization.” The 1981 subculture classic features early footage of LA-rooted punk acts that have since been stitched into the genre’s lore: Black Flag, Circle Jerks, X and Fear. A primer for anyone just getting into the scene or a nostalgic trip back in time for anyone who’s old enough.

Ramirez was raised in east Bakersfield, and when he graduated high school in 1998, he didn’t know what he wanted to do. He knew he liked punk music and hanging out with his friends — the crowd that was “good people but didn’t necessarily fit in.” He took a couple courses at the junior college, had a few “go nowhere jobs” and seemed to be “kind of counting the days, but not doing much.”

Then, one morning in the fall of 2001, the phone rang with an opportunity. A record store in town was going out of business and Ramirez was offered the chance to buy its inventory.

“I mean, absolutely I wanted to,” he says. “Who wouldn’t, right? But I knew nothing about running a business and even less about a record store.

“So, naturally, I took the chance.”

A place for the ‘hardcore few’

Going Underground soon opened its doors in a plate-glass-fronted former dress boutique across from the Kress Building, the gutted five-and-dime that is a downtown landmark. With a healthy stock of new and used vinyl and a built-in audience of patrons whom Ramirez knew from years of attending and organizing underground shows — Bakersfield’s wayward souls suddenly had a place to go.

“At first, I guess you could say it was a place to come and listen to music and hang out,” he says. “And nobody had any money. So I think that’s sort of where what you see today in the store and what we’re still about now. People know us, they come from all over — and if they don’t have a lot to spend, they’ll still find something. That’s always been the case.”

The money came in at a trickle, just enough for Ramirez to keep his doors open and the lights on in a downtown retail corridor that was quickly losing its core businesses. Large retailers and department stores that had been there for more than a half-century were shuttering overnight.

“You don’t plan on being a part of the death of something,” he says. “And downtown was far from bustling when we got here, but after we opened is when things really … started to slow down.”

The city’s downtown spiral came as records fell out of fashion. It was the early 2000s and CDs were music’s No. 1 selling medium, by far, and streaming (then illegal) was in its fledgling stages. Vinyl was an afterthought. Only the “hardcore few” frequented the shop, Ramirez recalls. “Most of the folks at that point were just big collectors who weren’t going to let it go. But the writing seemed to be on the wall.”

But Ramirez stayed the course and looked for other streams of income. He started a small label, also called Going Underground. He promoted punk and hardcore shows at his grandfather’s business, Muñoz Boxing Gym, in east Bakersfield. As his endeavors grew, he continued to welcome the town’s disaffected youth, to come hang out and, eventually, to work.

‘We met through music’

Ramirez briefly scoots away from our conversation to help a pair of customers, a local couple named Nick and Gabbi Esparza.

“When we come here it’s like a date for us,” Gabbi says. “We met through music. And we always find something special.”

“I’ve been to all the record shops, I used to live in the bay and go to Rasputin and Amoeba, but this is the place man,” Nick says. “You can find anything. Old hip-hop, R&B, blues — hard rock. Punk. I always leave with something I didn’t know I was looking for.”

Over the past two decades, Ramirez managed to come up with a blueprint for how to create something that wasn’t there before, seemingly out of dust and gravel, broken glass and concrete. Today, his Going Underground is not just the place to hear and buy music, but a conduit to share ideas and pursue art in the middle of a town that is much more renowned for struggle than triumph.

“He finds a way and that’s important,” Miguel Hiracheta tells SFGATE. “You know, people come into his shop and they’re looking for something — and it’s not records, you know what I mean?”

Hiracheta is one such individual. After a few years of junior college and working in construction, cutting and laying concrete and granite, he found himself on a break from work, prior to the pandemic. He soon came across Going Underground and started hanging out, listening to and discovering new music.

“My girl knew I was spending a lot of time there,” he says, “so she goes, ‘Ask for a job.’ COVID hit and suddenly they needed a door man, someone to make sure people could stand outside, spaced out and get what they needed. I was that guy.”

Now at the helm of the store’s second location in east Bakersfield about a mile from the mothership, Hiracheta runs Going Underground Video, an anonymous door in a neighborhood of empty single-story storefronts that used to be the homes of industrial cleaning supply companies, wholesale florists, heavy equipment dealers, carpet and tile showrooms and furniture warehouses.

It’s a place patrons can find old and rare VHS copies of movies: ’80s teen slasher flicks, B-list raunch fests and long-lost rom-coms that you can’t find on any streamer, along with dead stock DVDs, records and video games.

Going Underground itself has been in expansion mode for a while. Four years ago, the endeavor carried its Bakersfield never-say-die punk ethos into one of the most competitive markets in the nation, Los Angeles. It now has a small, but mighty, shop that helps anchor a block in LA’s bustling Little Tokyo neighborhood. The LA shop is staffed entirely by Bakersfield expats.

Going Underground isn’t the first record store to arrive in LA from another part of California and do well. Amoeba, the Berkeley-based mega-retailer, has been a monolithic standout in Hollywood since 2001. Forty years before that, Sacramento-based Tower Records opened its iconic Sunset Strip location in the fall of 1971. (The store closed in 2006, when the retailer filed for bankruptcy.)

But no record store has ever come from Bakersfield to LA and delivered a punk-centric culture back to the place where the genre’s roots on the West Coast can be traced.

“I mean, I wouldn’t say that it’s ‘full circle’ us being a punk record store coming here to punk’s epicenter,” Adam Schwartz, the LA store’s manager, tells SFGATE, “But there’s something to that.

“In Bakersfield, we all grew up as outsiders, that’s just a geographic and cultural truth,” he continues. “Now all of us are working and living here in LA — there are three of us — and, you know, we all grew up as punk kids. Coming up in that scene, you needed a place where music could be accessible, affordable and for the people, if you will. And it’s definitely part of the store’s ethos here in LA, too.”

‘There’s kind of a legend to it all’

While most of the patrons of the LA store are from the Los Angeles Basin, both Schwartz and Ramirez explain that each Going Underground location draws crowds from all over, but for slightly different reasons.

“I think the [Bakersfield] store just has more, a better used section,” Schwartz says. “… LA is tough to find used and when you have something people come get it right away. I still go through the stacks in Bakersfield and am like, ‘Oh my god where did we get this?’”

The music tastes can differ between the two metros as well, Schwartz explains, as the LA shop tends to cater to a slightly more esoteric audience.

“It’s not like we don’t have plenty of teens and young people coming through here looking for pop records or new releases or even reissues,” he says. “But we get a lot of requests for hard-to-find, limited-release stuff, little-known ambient music, or an avant garde composer. In Bakersfield there’s not as big an interest.”

But the two locations are still tied together with a shared yearning of a customer base that wants to be a part of a scene and learn new things, Ramirez explains. “I love the LA store,” he says. “When I go down there, I always see something new, hear something new. It keeps me going.”

“The people who come in the store, you wouldn’t believe,” Schwartz says. “They’re from all different backgrounds, sometimes from different places in the world. It’s been awesome. It’s LA, so definitely there’s a lot more energy, out and about. And we’re not ashamed of being from Bakersfield or anything. People sometimes make snarky comments or whatever, but I can’t tell you how many people come into [the LA] store and say they discovered us in Bakersfield and just have a great story to tell.

“There’s kind of a legend to it all.”