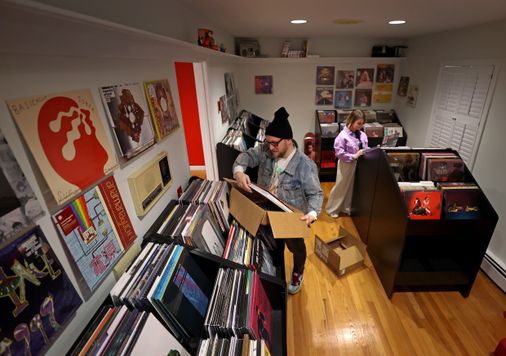 Day-to-day, Coty Smith operates primarily in a digital landscape. As a director of product management for a software company, he has spent more than a decade honing his e-commerce, digital marketing, and product marketing skills.

But in the background, away from the glare of a computer screen, lies a deep passion for something more tangible — collecting, spinning, and listening to vinyl records in all their rich analog glory.

“I’ve always just been a vinyl guy,” Smith said. “The packaging, the presentation, being able to go through the ritual of getting the turntable ready, forcing yourself to listen to a full side and flipping it over — that in itself is both rewarding and also relaxing.”

Now, the 35-year-old Kansas native is combining his professional expertise with a pastime that’s been a large part of his life for years. Next week, Smith and his wife, Lindsey, will open a brick-and-mortar record store, called Good Taste Records, in the North End neighborhood where they live.

The couple, who have been quietly selling vinyl records online for months, have scheduled a soft opening on April 1, with a grand opening event scheduled to coincide with Record Store Day later in the month.

Smith’s dream of owning and operating a store that caters to vinyl enthusiasts like himself (he was a vinyl DJ for the past 15 years, primarily spinning hip-hop, funk, and soul at venues in the United States and Ireland) comes with good timing.

To be sure, record-collecting is far from a new phenomenon, even as tapes and CDs arrived and then gave way to digital options. But in recent years it has experienced a significant boom, and during the pandemic hit historic highs.

Josh Friedlander, senior vice president of research and economics for the Recording Industry Association of America, said “the vinyl resurgence not only continued but accelerated in 2021.”

Last year, revenues from vinyl records surged 61 percent to more than $1 billion in the United States — the 15th consecutive year of growth, and the first time above $1 billion since 1986. (Those figures don’t account for used sales.)

“Though vinyl is still a relatively small part of the market compared to streaming music subscriptions,” he said in a statement, “it’s still a testament to the connection fans feel towards their favorite artists that a century-old analog format has remained relevant and even grown.”

For local audiophiles, there is no shortage of spots to pick up records suited to their personal tastes. There are, of course, the stalwarts that have supplied the region’s collectors for decades, from In Your Ear Records on Commonwealth Avenue to Cheapo Records in Cambridge’s Central Square.

But in the last few years several new stores, which like Smith have leveraged online sales and social media to tease upcoming releases, rare finds, and new inventory, have entered the arena.

In Watertown Square, Wanna Hear It Records recently celebrated its first successful year in business. The space, owned by California native Joey Cahill, has drawn crowds for its selection of punk, indie rock, and emo albums and its in-store musical performances.

Meanwhile, in Somerville, Vinyl Index expanded its footprint this month on the second floor of Union Square’s Bow Market. The shop knocked down a wall to an adjacent storefront that was being used for pop-up events and filled it with additional inventory.

“Vinyl Index is back and better than ever!” the company announced on Instagram when it reopened last week after renovating. “It feels so great in here with the extra breathing room, sitting room, and most importantly room for MORE RECORDS!”

There have also been success stories north of the city. Last year, George Andrinopoulos — better known as DJ 7L from rap group Czarface — forged ahead with a vision to open a record shop in Beverly, an idea hatched during a bike ride early in the pandemic. Sound Track’s first anniversary is in May, and business has shown no signs of slowing.

“It’s been great,” he said. “Much better than I could even have hoped for, to be truthful.”

Andrinopoulos said his clientele is a healthy mix of younger and older music fans who trickle in from as far away as Boston to flip through crates of records. He said the uptick in overall sales was likely helped by the pandemic, as people sought new hobbies and ways to stay connected to music while concerts were on hiatus.

“These last couple years we’ve all had the need to slow down,” Smith agreed. “And I think just in general people were looking for things to collect.”

Smith, who moved to the North End in 2015, said he and his wife, who met in high school, have planned carefully so they can offer customers an immersive experience that will also foster a sense of community when they open.

“[We want to have] a place for consuming and enjoying music,” said Smith of the shop, which will have a multi-station listening booth for previewing records, host small performances, and have a curated selection of new and used vinyl.

From the day they moved into the quaint neighborhood, Smith knew it would be the perfect place to launch a vintage business. Now he’s excited for it to become part of the fabric of the area.

“Neighbors and businesses have heard us talking about this the last six months,” he said. “We now get to go and tell them, ‘Hey, this is finally happening and you all get to not only be the first people to see it but to also make sure we are running this as well as we can.’”